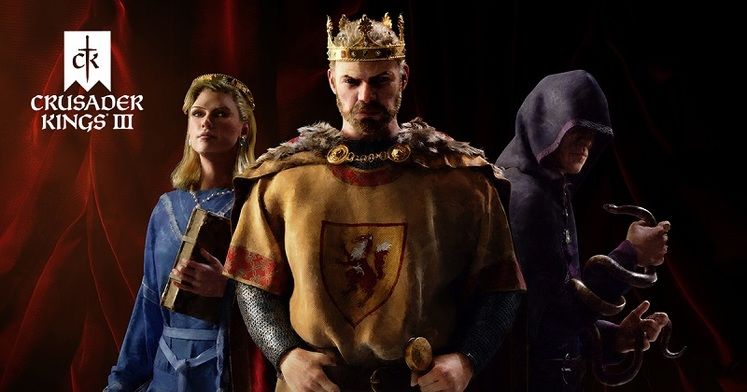 Crusader Kings 3 is a game of many possibilities. One can follow in the footsteps of great historical figures, bring back fallen empiresfrom the dead or, as one player discovered, rule over others as a character who manages to somehow marry and divorce himself.

Neill was both a ruler dressed in finery and a mere pawn in Reddit user HorribleHistorian's plot to create "the most hideously inbred family [they've] ever made." 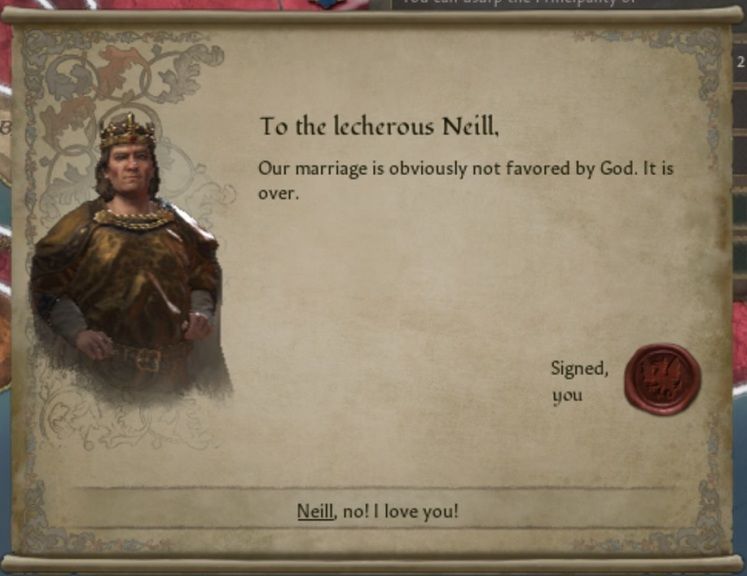 It's not all that strange a challenge in Crusader Kings 3, where your main goal is to ensure that your family persists through the ages.

Nobody can say for certain how Neil managed to marry himself, but having a ton of power – or the influence of a rather hilarious bug – probably had something to do with it.

Some of his court members likely viewed his choice of partner as rather eccentric, but while he chose to stay true to his feelings, the flame of love was not everlasting in Neill's relationship with his own person.

That's likely why he wrote and sent a letter to himself, announcing his decision to divorce.

"To the lecherous Neill," wrote Neill, "Our marriage is obviously not favored by God. It is over. Signed, you."

Upon opening the letter and going through its heartbreaking contents, Neill couldn't believe his eyes, once more proclaiming his love to himself, despite knowing that nothing more could come of it. A truly dramatic end to one of history's most emotional stories.

HorribleHistorian isn't sure how this came to pass, as it's not something you regularly see in Crusader Kings III. That being said, it has got to be one of the most hilarious bugs the grand strategy game has given us so far.

Scrolling through the Reddit thread's replies, you'll find other amusing anecdotes, including one about a ruler declaring war on himself.

Another user noticed that if there's an ongoing rivalry between your character and their husband, it's possible for you to receive an event to frame your husband's spouse (which is also you) for adultery.

Crusader Kings III is a great game when it works as intended, but stuff like this just adds to the inherent fun and madness of playing as a ruler during the Middle Ages.

All I'm wondering now is what other situations we'll see when the Royal Court expansion and Patch 1.5 drop next year. Perhaps Neill will forgive himself following the divorce and give marriage a second chance.

Crusader Kings 3 Is Getting Its Own Version of...